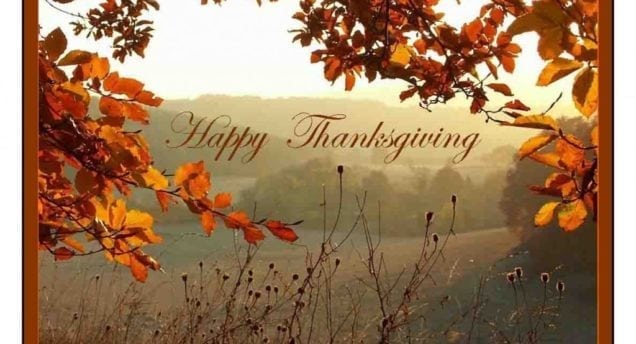 While Google has made no fewer than 14 “major” updates to its algorithm this year, perhaps the biggest move will be that they have moved to “make search more secure” and eliminated our ability to track keyword referrals for SEO efforts.

Kinda strange, then, that I would say that – in a way – I’m thankful for Google’s tough stance on making SEO even more challenging…I believe it’s ridding our Industry of the “pretenders” (I seem to be getting less and less SEO spam emails…you?).

While SEO has become more challenging, it’s also helping our Industry to evolve. We must all become solid “digital marketers”, and “optimize” efforts across a multitude of channels. For this, too, I am thankful. Earlier this year, our company removed titles such as “SEO Specialist” and replaced these with “Digital Marketing Specialist”. It just makes sense. There are many more changes/improvements happening at Vizion Interactive, and we expect to launch some of these, early in 2014.

Within the past two months, we have been able to bring on some new talent to the team, and I want to make sure that I take a moment to recognize these folks.

Jordan Kasteler has joined the team as Digital Marketing Strategist. Jordan is a well-known expert in the areas of technical SEO, content marketing, social/social promotion, usability/CRO and viral content marketing (aka “link bait” or “share bait”). Prior to joining Vizion Interactive, Jordan had been in-house with PETA, agency-side as a co-founder of Blueglass, and in-house as Sr. SEO at Overstock.com. Jordan is a contributor to Search Engine Land, Marketing Land and Search Engine Journal publications, and has been a speaker at Search Engine Strategies, SMX and Pubcon conferences. Jordan also recently spoke at the Kansas City Search Engine Marketing Association and will be speaking at the Dallas Digital Summit, which Vizion Interactive will be sponsoring (if you’re attending, please be sure to stop by our booth and say “hello”!).

Ben Douglas has joined the team as Business Development Manager. Ben comes to Vizion Interactive after serving in a similar role with Advance Digital and working in-house with H&R Block, overseeing its SEO and PPC initiatives (handling up to $12,000,000 per month in PPC spend). Ben is a frequent speaker at the Pubcon conference and brings an ROI focus to his job. It is for this reason that I was able to – for the first time – “remove myself” as the primary business development person at Vizion Interactive, because I have found someone who is not driven (at least “not entirely”) by a commission check. Ben is, like me, very keen on consultatively selling. This means that he will not sell something to someone “just to make a buck”. He wants to make sure that we are presenting opportunities which make sense and will drive ROI. Ben has a unique ability to forecast these opportunities and crunch the numbers to help prospects understand what may be necessary to be successful and when (if) ROI can be achieved. I am extremely thankful that I have someone on my team who can take ownership of such an important piece of anyone’s business.

Paige Bixler has joined the team as Jr. Digital Marketing Specialist. Paige is a recent graduate of the University of Washington, where she was co-captain of its Gymnastics team. Paige is just getting her feet wet (and trying to learn when/if she can take me -seriously). While being a student-athlete requires a lot of time/commitment, Paige did find time to work at the University of Washington Athletics Department, as an Intern, handing Social Media.

Joshua Titsworth joined the team earlier this year. Hard to believe, as it seems as if he’s been around for YEARS! Joshua has come in and successfully helped us to launch our SMB SEO initiatives, and bring a fresh new perspective and approach to our influencer outreach and link building initiatives. Aside from being just a terrific person, he brings a lot of levity to the team, as was demonstrated in our Josh vs Josh post on Facebook.

Having the ability to hire new folks to the team means that we have clients providing us with this opportunity. Of this, I am extremely thankful!!!!

First, I must thank my very first client (signed on over eight years ago), A-1 ServoMotor Repair. As many of you know, I bootstrapped this company and was doing so in “less than ideal” circumstances. You know how many restaurants will frame the first dollar that they made? That’s pretty much how I feel…I will never forget. That one gesture of faith has led to the build-out of one of the most talented, caring, honest and hardworking teams in our Industry. Since that time, I am also thankful that I can say that we have many clients who have worked with Vizion Interactive for nearly eight years, as well. Along with that, we have new projects coming in that are also very exciting which will allow us to continue to add to our team. So, THANKS TO EVERYONE who is a part of making that happen!!!!!

Finally, I must give some huge “shout outs” to two individuals who have really made significant contributions to Vizion Interactive:

Josh McCoy – Josh has worked at Vizion Interactive for over five years. Not once in five years has he called in sick…not one single time. For this, Josh won the first ever “Iron Man Award”. Josh is a soldier in every sense of the word (literally…he served in Operation Iraqi Freedom). When the going gets tough, Josh gets tougher. He is an unquestionably hard worker and clients love him, almost as much as I do.

Rebecca Weichmann – As my wife will attest, it can be a difficult job to “keep me in line” (ie: organized, on-track, etc.). As a self-diagnosed sufferer of ADD (see: my post – which was inspired from one of our clients of eight years –  from 2008 on this, here, I can be a bit “all over the place” (which has actually served me well, in many cases). Nevertheless, without Rebecca taking my ideas (and the teams’) and seeing these ideas into “actual work”, we would be in a real big mess, right now. Rebecca has really flourished in her new role as Operations Manager, and has helped our company go from a “less than good” 2012 to a TERRIFIC 2013!!! I honestly don’t wanna know what I would have done without her help, this year. I tell her as much as she can take it…I am SO thankful for everything that she has done to help turn things around, and I’m very excited to see what she may be able to do in 2014, with all of the changes that will be taking place in the coming months.

A final – and “largest” thank you has to go to my wife of 11 years. You can only imagine how tough it is to be married to a guy who’s starting a company, working from home (while kids run rampant throughout the house), who is a bit – uhm – “disorganized” while managing the schedules of three very active little ones. Cheri, you are a blessing. I really don’t know how you do everything that you do. I am very thankful that you came into my life. You ground me. You remind me, constantly, of what’s most important in life. I try to reflect that with my dealings with members of the Vizion “family”.