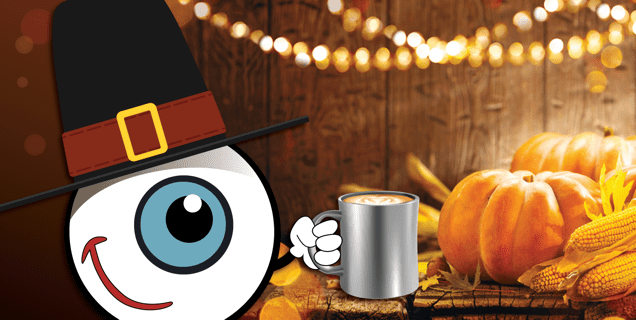 Fourteen years ago, I founded Vizion Interactive after having “an experience” bootstrapping a previous agency (for details on “the experience”, please schedule an appointment at your nearest tavern).

It was a challenging time, with a nine-month old son and – one year later – news that twins were on the way. Couple that with the fact that my wife had recently left her successful career to support my efforts in growing the previous agency and you can imagine the stress involved.

I was brought up to believe that “everything happens for a reason”. Perhaps it was my fate that I should have a run-in with someone less than “nice” to make me understand that I’m capable of “doing this myself”?

But the truth is…I didn’t do this “by myself”. On this day of Thanksgiving, I must remember all of those who played pivotal roles in making this a reality.

First, I would like to give my thanks to God. Without God in my life, my panic attacks could have been the end of me. As I mentioned previously, the stress was real. I had to defer to a power that does not come in human form. That, and my angel on earth (my wife) kept me sane (*my ringtone for my wife’s calls is a harp…that’s not a joke and can be verified). Having a foundation in faith and a loving family is the only reason why Vizion Interactive exists. Well, and clients. And, a terrific team.

My first client was a very small, family-owned business in Irving, Texas. We maintained that business relationship for 12 years. Without them “stepping out on faith” to work with an unknown, start-up company, we didn’t stand a chance.

Since my wife and I would be welcoming twin daughters into the world, we came to realize that living close to my in-laws was a good idea. With that realization was concern…Would my clients in Dallas understand me no longer being local? Would being away from my network in Dallas hurt the business? Would moving to Overland Park, KS (a much smaller community) hurt my ability to grow?

All I can say is that I “stepped out in faith”.

In May 2008, we moved to Overland Park, KS and with that move came unreal understanding of many of our Dallas-based clients and other opportunities that perhaps would not have happened without the move (namely, working with UMB Bank). Thank you, UMB Bank!

The other blessing from the move to Overland Park, KS was another “risky” move…Making our company operate completely virtually. When we did this, it was not something that was very popular (or understood). Nine years later, we have staff in Los Angeles, Tampa, Dallas-Fort Worth, Nashville, Wilmington, North Carolina and Overland Park, Kansas and we’re not missing a beat. In fact, new-ish/large clients seem to be completely on-board with our operations, such as Universal Pictures Home Entertainment. Thank you, UPHE!

And, of course, none of this happens without our tremendous team! Leading the charge is my “right hand man”, who happens to be a lovely woman…Rebecca Weichmann. This month, she celebrates (CORRECTION: “WE” celebrate) her 10th year at Vizion Interactive! Rebecca is the yin to my yang. Without Rebecca working side by side with me, I hasten to think where we would be. “Thank you” is not enough, Rebecca. There is a special place in Heaven for you.

One final note: When I founded Vizion Interactive, one of the first things that I wanted to do was to name the company and secure a domain for our company’s website. In my previous venture, my former “partner”, when asked why I was no longer with the company, told them that he and I didn’t share the same “vision”. So, there you have it. I wanted to name the company “Vizion” (the former company prominently used the letter Z in its name) and tried to secure the www.vizion.com domain. The owner had no interest in selling, as much as I continued to try to secure it over the years. Fourteen years later, we have been successful and will be moving our web address, accordingly, and affording our team members a much shorter email address.

To all that have been a part of the past 14 years…Thank you, one and all.