Melanie is a featured guest author on Vizion’s blog.

Melanie Deziel is an award-winning branded content strategist and consultant, and the founder of The Overlap League, the native ad newsletter. She is a board member of the Native Advertising Institute, has served as an executive judge for the Digiday Content Marketing Awards, and travels the country educating marketing, sales and editorial teams on branded content strategy. Melanie is the former Director of Creative Strategy for Time Inc., where she led ideation for sponsored content programs across 35+ publications, and was the first editor of branded content at The New York Times, where she conceived and wrote in-depth pieces sponsored by advertisers, including the “Women Inmates” piece created in partnership with Netflix and Orange Is The New Black and the “Grit & Grace” feature on The New York City Ballet presented by Cole Haan, which earned the OMMA for Best Native Advertising Execution in 2014 and 2015 respectively. You can find Melanie on Twitter and elsewhere as @mdeziel.

As a content strategist, I hope to educate as many people as possible about the power of brand storytelling through my writing, speaking, workshops, consulting, startup advising and through my native ad industry newsletter, The Overlap League.

Among my proudest achievements and honors, I have degrees in journalism from UConn and Syracuse, of which I was one of 50 honored alums. I’m a member of the board of the Native Advertising Institute, a former executive judge of the Digiday Content Marketing Awards, and the author of the native ads that won the 2014 and 2015 Best Native Advertising Execution OMMA Award. 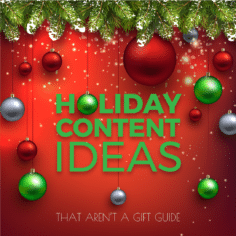 Special thanks to Melanie for contributing this informative holiday content marketing post, filled with awesome ideas for any business! Let us know your favorite below, and take advantage of our free holiday... Read More