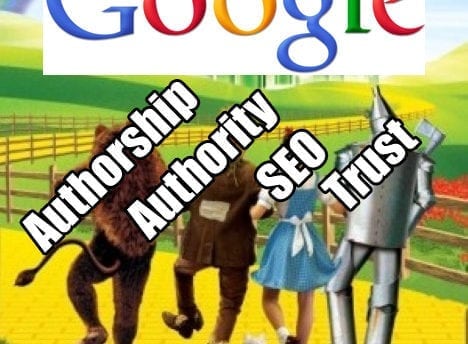 While Bing and Yahoo are changing the way their SERPs look, Google has decided to join along by removing the use of rel=author. That’s right, no more photos by search results any more. Huge move right? While it’s not big enough to make SEOs scream, “THE SKY IS FALLING!” it is big enough to swivel some heads, cause some face palms and deep heavy sighs in others. Especially those (myself included) that got clients to implement this (recently I might add) only to have it taken away. And for those of us that just did that, we may be like:

So what was authorship?

A little over a year ago Google introduced “Authorship markup”. Basically this would allow Google to connect authors with the works they’ve written and display their photo beside their work in the search results. But you had to connect your account with the sites you wrote for with your Google+ profile. Huge right? This resulted in higher click through rates and other bonuses. Some also used it as a sign of trust, but was it really? In my opinion, no but I’ll get to that later. Was this a huge signal? Ehh, it depends who you ask.

Is it a big impact?

Like I said, it was huge for people who were big on getting their clients/sites more click through rates but this also introduced many people to schema markup. And while Google is removing authorship, schema markup will always be there. If anything, this should be another wake up call to get schema implemented and in place. This is and always will be a huge factor in search. It’s more information and more detailed for search engines to use in their ranking and display for users.

Does it kill trust and authority?

No, and honestly if you think this does kill trust and authority you’re either working for a company/client who may have a bad reputation. Before getting involved with any client/person hopefully you’ll do your research. No matter what image shows up in the SERPs, the information that shows up will help you determine their authority and if they can be trusted. As my friend Alan puts it in his own post, “do the right things for the right reasons”.

This speaks to a lot more than just “getting your image to show up in Google SERPs”. It speaks to doing/being a good business. It actually is was possible to get an author image to show up even if said author had a bad reputation. And in all seriousness, authorship and trust comes down to one’s own reputation. And for that reason, I’m kind of glad Google is getting rid of authorship.

If you work for/own a business who people would deface a logo/image of your employees if they saw one why would you want to show up in the SERPs? Hopefully you wouldn’t. And like Chick-fil-A:

you wouldn’t want to get caught in a sticky situation like they did trying to use fake a profile to help their side (though not Google+, the same motives apply). The Internet is a powerful tool.

Where does that leave us now?

From an authority and trust standpoint it should hold everyone more accountable and make them more aware of their online reputation. As I’ve written about in the past, I worked for a non-profit that ended up with a reputation issue caused by a doctor that volunteered at the clinics. And believe me when I say if we posted her photo in a way to “build trust” or “authority” this doctors photo would’ve ended up with a mustache, a goatee and horns. Did the doctor have credentials? Yeah, and this provided some “authority”. And just about anyone can gain authority in their industry. Seriously, they can, you just have to know the right people and show some good content in order to get permission to post on different publications. But just because you get permission to post there doesn’t mean you have also gained their trust…does it?

Are authority and trust mutually exclusive?

I’m going to say yes. One can gain authority by degrees/certifications/honors but lose trust based on actions not related to said degrees/certifications/honors. And eventually the trust lost will impact the authority given. Which leads me to believe that trust, in the grand scheme of things can/will have a bigger impact than authority. Did I just lead you on a little rabbit trail? Maybe, one of the best SEOs/people I know wrote about ADD and SEO.

And just maybe, that’s why I’m at this point. We shouldn’t need to rely on authorship markup to help improve the authority/trust of a website. We should be looking further into the client/site and the related search results for more information. Beyond “traditional” onsite and offsite what can be fixed? And I do mean fixed, not optimized. It’s possible to optimize a website or social media profile, but not fix what’s really wrong with it.
We really have to get to the point as an industry at the place where we evaluate the overall reputation of a site rather than the current ranking of a website. Is it possible to game the system for a while? Yeah. “For a while” implying temporarily. If we really want our clients/sites to be trusted and been seen as more authoritative, then we must begin to treat them as such and help them get to the same level of integrity and service quality they must be at.