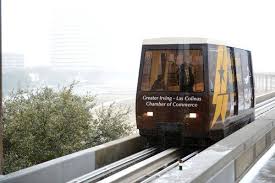 On a recent lunch break, Nathan, Sona, and I decided to hop on the Las Colinas tram (officially the Area Personal Transit system, or APT). I wondered why I never saw the tram moving back in the mid ’90s until I read an article that covers tram details including the temporary three year shutdown.

The Las Colinas tram (APT) (see photos) operates between 10:30am and 2pm, Monday through Friday, to help businessmen and women get to the shops and restaurants by the canal. The proposed rail route was never completed, but construction is scheduled to begin by the end of this year. Within the next two months, part of the tram’s existing track will be closed and temporarily removed for construction to take place on the edge of Lake Carolyn just across the street from William’s Square.

According to the tram operator, who was cool enough to give us the head’s up, plans are to connect the DartRail system from Dallas to Las Colinas by 2011. Travelers from Dallas will be able to exit Dart in downtown Las Colinas and hop on the tram to arrive at the doorstep of many major buildings in the area.

Since Vizion Interactive is located within the path of the proposed tram route extensions, this is newsworthy info for us. With employees living in Dallas, Addison, and North Richland Hills, it will be great when at least some of us can take the rail to work. Yay! Save the planet! Not to mention you could read a book or check your emails on the way to work instead of dealing with traffic.

Of course, we’re still 3-4 years out from completion, but as the tram operator pointed out, they’re building apartments and lofts like crazy right now in order to draw the restaurants and other retail businesses in that would be necessary to really fill out the downtown Las Colinas’ landscape.

We’re in the heart of the up and coming business district in the DFW metroplex, strategically located between Dallas, Fort Worth, Addison, Arlington (future home of the Dallas Cowboys), and the DFW International Airport. We’ll keep you posted on all the cool developments here in Las Colinas!