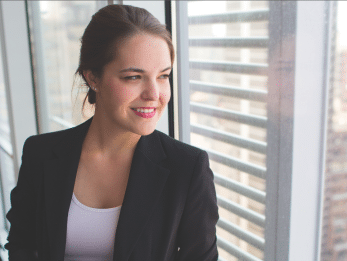 Vizion had the pleasure of chatting with the Director of Creative Strategy for Time Inc. and Founder of The Overlap League Melanie Deziel at this year’s Dallas Digital Summit 2015.

Kristien: I’m Kristien at Vizion Interactive, here at the Dallas Digital Summit 2015 with Melanie Deziel. Thank you so much for being with us. Can you tell us a little bit about yourself and what you do?

Melanie: Sure, I’m the founder of the Overlap League, which is a native advertising industry newsletter with jobs, events, and recent examples to help people get up to speed on the industry. Because it’s growing, but it’s also a tiny corner of the industry, so good to help people learn more about it. I’m also the Director of Creative Strategy at Time Inc. We have 35 U.S.-based properties, and my job is to help create branding content programs that span more than one property, helping people adapt to, say, the different voices and audience of Sports Illustrated versus People versus Entertainment Weekly. So it’s a big job and a lot of creative opportunities there.

Kristien: Great, and you’re expertise is in this native advertising world, so can you tell us a little bit about that?

Melanie: Yeah, definitely. I think most forms of advertising, you sort of rely on all the tools and channels that are available to you to get your own message out to your audience. One of those channels is publishers. I mean, publishers have massive audiences, and advertisers, understandably, are eager to reach those audiences. So what we do at Time Inc…and I previously worked at the New York Times and Huffington Post, so any of those rules, what we do is help advertisers understand authentic story-telling and help them use the tools and tactics that we use as journalists, as story-tellers, to reach our same audience. Help them tell stories that are interesting and engaging and funny to really help them connect with our audience.

Melanie: Yeah, I’ve been really lucky to work with some of the best teams out there, you know, the publishers that I’ve worked for. One example that gets talked about a lot is one I did when I was at the New York Times with Netflix and the series Orange is the New Black. They said, “We want people to know it’s based on a true story, and we want to connect with the New York Times audience.” So what we helped them do was create a 1500-word investigative piece, using actual data and sources, that showed the changing trends in women’s incarceration.

There’s a lot of content marketing out there. In native advertising, that’s not great. I don’t want to call anyone out specifically, but a big issue, I think, is most folks are afraid to back away from their products and services. So they kind of become that guy at the bar who’s only talking about himself, and nobody really wants to hang out with that guy for very long.

You know, there’s a lot of stuff out there where they’re really just selling or talking about their product over and over and not thinking authentically about “What can I offer? What value do I have? What information? How can I teach my audience something? Or entertain them? Or help them solve a problem in their every day life?” So, I think, most of the content out there that doesn’t do well is in that vein. A little too focused on what you’re trying to sell and not enough on what your audience really needs from you.

Kristien: Nice. Since we’re so inundated with all these marketing messages all the time, what can we do as marketers just to ensure a native ad’s success?

Melanie: Yeah, I think the big thing, it comes back to what we just talked about, just thinking authentically. What is your area of expertise? What is your area of authority? And what value do you have to bring to your audience? One of the common examples that people talk about in content marketing is the Dove Real Beauty campaigns, right? Where they do the Real Beauty sketches, showing women that they’re confident, that they’re beautiful, that maybe their own view of their own beauty isn’t as accurate as what the rest of the world is seeing.

At the root of it, they’re a soap company. They could have made a commercial talking about residue and their cleanliness/effectiveness ratio or something, you know? That wouldn’t have connected with people, but they took a step back and said, “Okay, well, we’re part of someone’s hygiene regimen. We’re a part of their beauty regimen. We’re one ingredient in a long process that helps people feel comfortable and beautiful and confident, so let’s have that conversation instead.” So I think making sure that you’re thinking about, again, that area of authority and what value you have to bring to your consumers, you’re going to create an emotional connection with them and an authentic connection that will make it so that it will result in sales in the future.

Kristien: Awesome. That’s a great tip. We’re now at the end of 2015, going into 2016. Do you think native advertising is going to be just even more relevant, and any predictions?

Melanie: Yeah, I think native advertising is kind of a buzzword right now, and a lot of people are worried, maybe, that it’s a bubble or that it’s not going to be around. I think it’s important to remember that brand story-telling, brands are always trying to tell stories. The advertorial has been around for over 100 years, so the idea of a brand trying to tell their own story and connect with consumers through story-telling is not new, and I don’t think it’s going anywhere. I think what has changed is the tactics we use to do that and the different names that we call it, whether it’s advertorial, branded content, sponsored content. You know, there’s a lot of different names.

Kristien: Great, thanks so much for being with us.

Melanie: Thanks for having me.