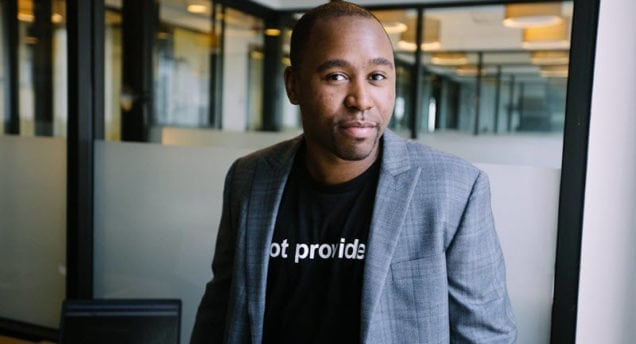 Vizion had the pleasure of interviewing Personas Expert and Founder of iPullRank Michael King at the Dallas Digital Summit 2015. Michael King gave a pre-conference workshop on the topic of: “Comprehensive Search and SEO Strategies”.

Hear what Michael has to say in the video below, on the hot topics of Google’s algorithm updates, the importance of building personas, content marketing strategy, and of course, his own personal digital marketing predictions for 2016!

Kristien: I’m Kristien with Vizion Interactive here at the Dallas Digital Summit 2015, here with Michael King, founder of iPull Rank. Thanks so much for being with us today.

Michael: Thanks for having me.

Kristien: Awesome, so just going back to your talk a little bit, you talked about Google algorithm updates and what some of them are and how we should best use them to our advantage. What are some of those?

Michael: I mean, so, Penguin, Panda, I would say those are the core of what have fundamentally changed search in the last few years. And it’s actually awesome from my perspective, because it’s forced SEOs to actually do good stuff. So it’s like the stuff that I’ve always wanted to do and now we have the platform to do it. So I would say anybody who is still forced to make “SEO content,” use those as the opportunity to do cooler stuff.

Michael: I think so, I mean, you know, of course there are situations where it’s overkill, where you have such small traffic, such a small market cap, and you know, there’s just one type of person. But I think it’s still valuable even then, because it’s a way to document how you’re thinking about who you’re talking to so that when you’re doing content or whatever marketing efforts you’re doing, everybody’s just on the same page. So I think it’s worth it across the board, definitely.

Kristien: Awesome. And you have a lot of steps that you use for building personas. Do you have a favorite, like top three? Do you recommend using them all?

Michael: I mean, so I wrote this really long post for Moz, it was 12,000 words, and you know, people were like, “That’s cool, but I don’t really want to do all of that. Is there something else I can do?” And so, yes, I’ve developed a shorter way to do it where basically, you take your mailing list, you enrich it with tools like FullContact and TowerData and you also use Facebook’s Audience Insights, but you know, other than that it’s still really collecting data, understanding the patterns in the data, and then writing a user story for it. That’s really all it is.

Kristien: And a little bit about Facebook, you talk about social listening a bit too. I think that’s a concept that’s a little daunting for some people. How do you…are there any tricks to using social listening or graphic research?

Michael: No, not really. I think it’s just…if it sounds new to you, you don’t really know where to start, but most people feel that way about keyword research. Like, you go to a tool, you put in keywords, you’re like, “What do I do? What do I use these for?” And it’s really the same thing. You’re putting in keywords, seeing what people are talking about, make some decisions based on that, and keep doing that until you feel like you know enough.

Michael: Yeah, sure. A content audit is an opportunity to really see what’s been happening and what you can do with it. So, primarily we’re using a tool called URL Profiler for that to pull a lot of data on users, and then also looking at a subset of those URLs qualitatively and making some decisions by actually reading that content. So the process, the workflow, is start with ScreamingFrog, collect all your URLs, put them in the URL Profiler, collect data from your analytics, social shares, also from links and some other things like readability scoring, and mobile friendliness tests and page speed and all that, and then just do a bunch of pivot tables until you’ve found some key insights about your content.

Also, on the qualitative end, just really reading it, seeing where there are opportunities to improve it, and then you also just identify some trends in your content, like you’re going to start to see that certain page types have the same problems over and over so you can then make a content strategy to improve things and you can also identify if things are just not working for you. Most content marketers are like, “Yeah, so where are your blog posts? Where’s your eBooks? Where’s your infographics?” You can tell if those things have been done in the past and just don’t work if you do a content audit.

Kristien: Awesome, cool. And, so we’re at the end of 2015 here almost. Any predictions for 2016 as far as digital marketing goes?

Michael: I predict that iPull Rank is still going to be even more awesome, we’re going to keep growing, and we’re going to do awesome things. No, as far as…I mean, all that stuff is true, but as far as predictions, I think that personalization is going to continue to become a bigger thing. I think that users are getting more and more used to it and in fact, because of the data that they know they’re giving to people, they’re expecting better experiences. And I think next year and the year following, is where personalization is really going to come into a mature state.

Kristien: Nice, anything else you want to add?

Michael: I mean, I do believe we’re the best, but I don’t want to be arrogant about it. I do want to add that we have…this is our second year, well finishing up our second year and I’m just really excited about the team that I’m building and what we’re doing with the great clients that we have, I’m just excited to see that keep going, so yeah.

Kristien: Awesome, thanks so much.