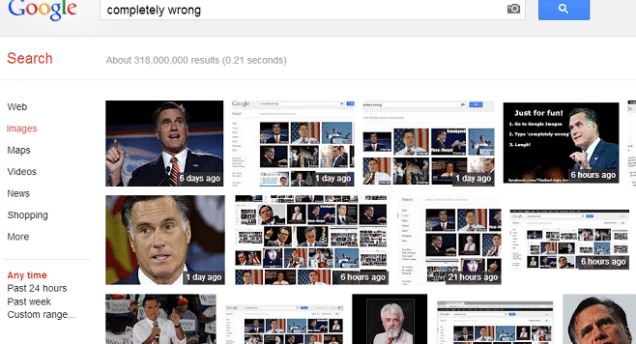 After taking a shellacking in the media, polls and social media after his 47% comment, Mitt Romney decided to take a step back, and distance himself from those statements.  After a great showing in the debate and with polls shifting in his direction, Romney backpedaled on the statement by saying it was “completely wrong.”

Romney wanted to get the word out, but somehow shot himself in the foot again.  His “completely wrong” statement now rules the social media airwaves. If you do a Google image search for the term “completely wrong,” the page is inundated with images of the candidate. This brings back the memories of President George W. Bush’s Whitehouse biography showing 1st position for the term “miserable failure.”

This problem (Google Bombs) has plagued politicians and celebrities alike.  Rick Santorum had a similar problem with his name being associated with a sexual byproduct that’s a bit too graphic to talk about in detail here. (Of course, you can Google him and easily find out.).  Currently, if you search for the term “one term proposition” on Yahoo! or Bing, President Obama’s likeness appears in search and image results.

Celebrities have also experienced Google Bombs, sometimes intentionally. In 2007, comedian Stephen Colbert held the number one position for the term “Greatest Living American” which was taken away 30 days later. This Google Bomb was initiated by Colbert and his loyal fan base and left a lot of people in the SEO world saying “Google we thought you fixed this.”

The difference with Romney’s situation is that there are no mastermind SEOs, link building gurus or political pranksters behind these image results.  This is Google’s algorithm associating social search with news and real time search.  So many political bloggers, news outlets and mom and pop bloggers are talking about Romney’s retraction of his prior statement, and so many users are searching for it, that these images dominate the top results.

“Completely wrong”  has now shot up to number three on Google’s hot Trends list, which means Romney’s reputation management problem is not going away any time soon.

Google has confirmed that this is not any type of manipulation of the algorithm of any sort, and this is just the natural result of the massive amount of news, and media outlets posting articles about Romney’s comments.