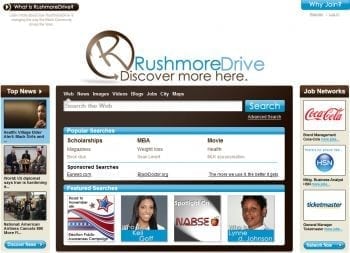 Just over a year ago, I wrote about Rushmore Drive a search engine that was launched in an attempt to deliver relevant search results to the black community. It apparently uses a “a dynamic layer of Black-targeted search results and user-generated content.”

Well, now one year and two months later there are reports that Rushmore Drive is closing, shutting its doors.

According to the AP article, IAC will close Rushmore Drive and the company named Black Web Enterprises will also shut its doors.

Spokeswoman Stacy Simpson said Wednesday that the Barry Diller-led Internet services company will close the site Friday after an unsuccessful effort to sell it. She also said that Johnny Taylor, the site’s chief executive, has resigned.

I have to admit it was a bold move by IAC last year to launch this search engine during the political campaign of Barack Obama. Apparently there were using “patent pending technology” that “increased penetration of sites heavily trafficked by the Black community”. I have yet to find a patent or patent application that talks about this technology, though.

I had performed several searches at Rushmore Drive and was confused over the search results, especially when a web design firm was “ranking well” for a phrase such as search engine optimization. But maybe I wasn’t the only one confused by their search results?