At this time in 2019, the internet at large was steadily filling up with memes about the degree to which the year had, frankly, sucked failed to live up to expectations. For example, there was this gem, which represented the way much of the internet population truly felt about how 2019 had affected their hopes and dreams: 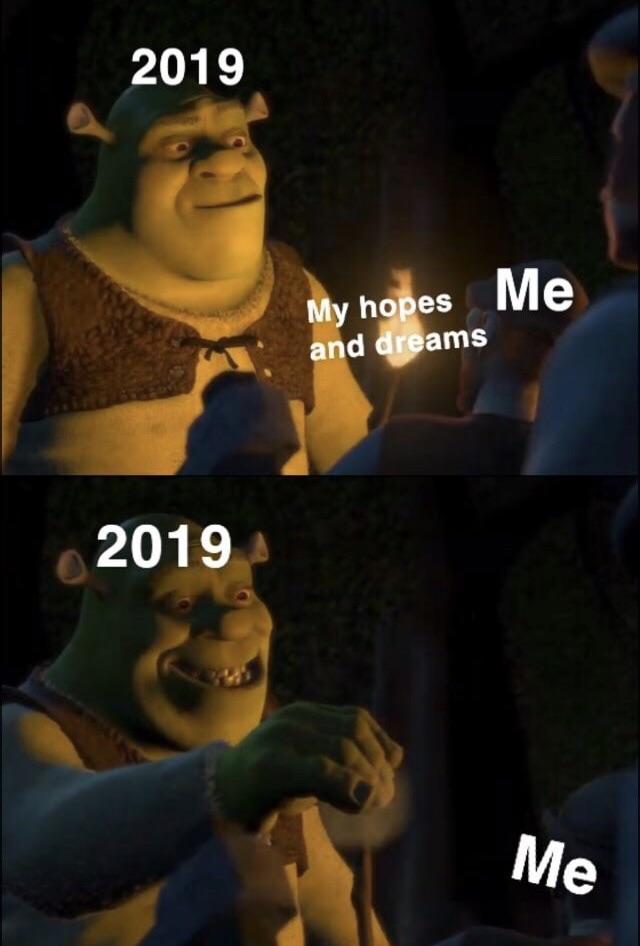 It was an iteration of a relatively popular meme at the time – Shrek silencing a foe or differing opinion with one punch. However, this one truly spoke to the way many people felt 2019 had treated them by years’ end – present hopes and dreams, suffer the immediate consequences. Whether they were referring to the impending impeachment trial, Brexit, the burning of Notre Dame, or personal events remains a mystery. Suffice it to say, many of us looked to 2020 as a new decade with a wealth of new opportunities to come. Little did we know how fast our dreams of a new decade would be dashed.

What follows is this self-proclaimed meme enthusiast’s list of the best memes of 2020 (so far). While chronological, to some extent, the memes are otherwise in no particular order of quality.

Early memes supplied revealing information about what’s truly important to many of us, including this one: 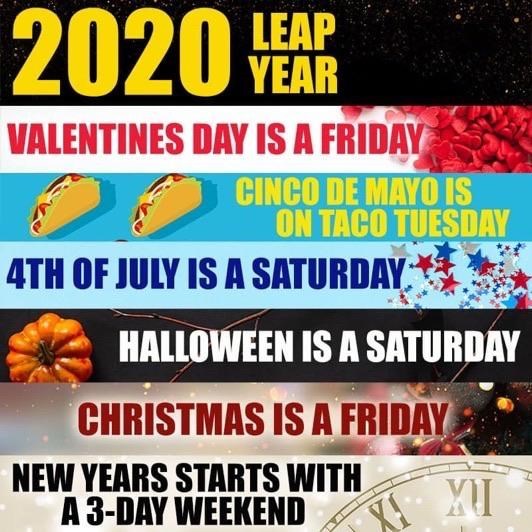 At the beginning of the year, things were shaping up fairly positively – a Leap Year had forced the fortunate coinciding of some of our favorite holidays with long weekends. Cinco de Mayo was on a Taco Tuesday. All was well.

And then, 2020 truly got underway. As the strange occurrences, international crises, and global pandemics began to pile up, it quickly became clear that perhaps, this year wasn’t what we had expected when 2019 came to an end. 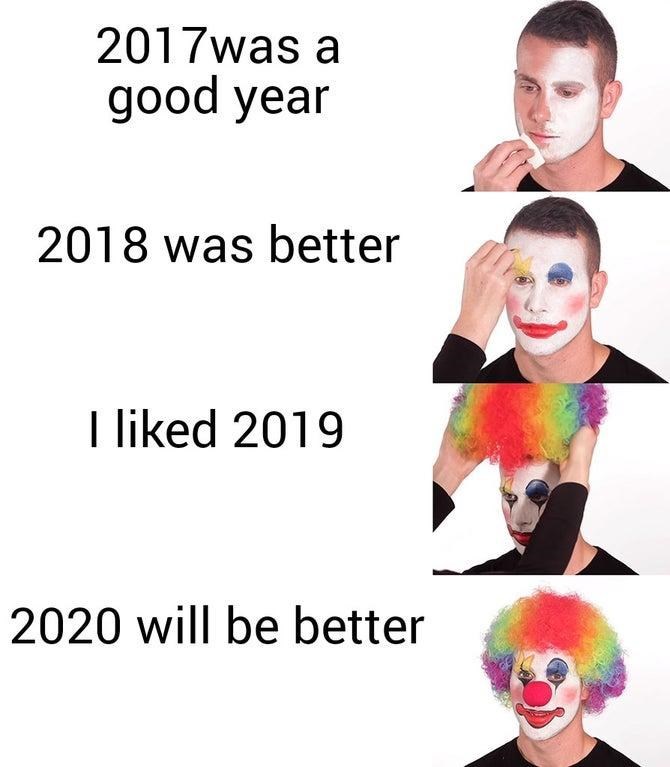 The meme, featuring a series of steps in which a man gradually applies clown makeup, served to illustrate two essential points. First, of course, those of us who believed 2019 would be exponentially greater than 2018 (and 2020 even better) were likely making fools of ourselves by buying into 2020’s hype. Second, the clown makeup itself generally illustrates the wackiness 2020 has brought us so far.

By the time the COVID-19 pandemic truly became a major news item here in the US, things had gotten a little dicey, to say the least. In fact, many of us had begun doing the unthinkable – wishing we had 2019 to do all over again. 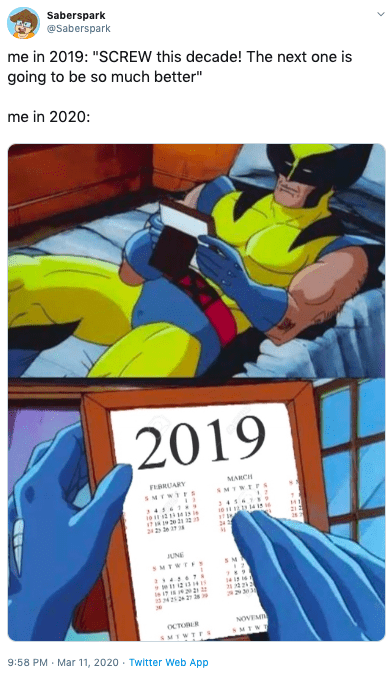 Three months into the year was all it took to truly set the tone for the memes of 2020 – confusion over what was happening. A sense of loss for the trying times we’d recently escaped at the end of 2019. A driving, sentimental need to get back there (or at least, you know, rewind the clock a bit until we weren’t living in a B-grade horror movie).

And so, as the year progressed, so did the memes, as illustrated by one of the most popular, viral memes of 2020 so far – the 2020 challenge. 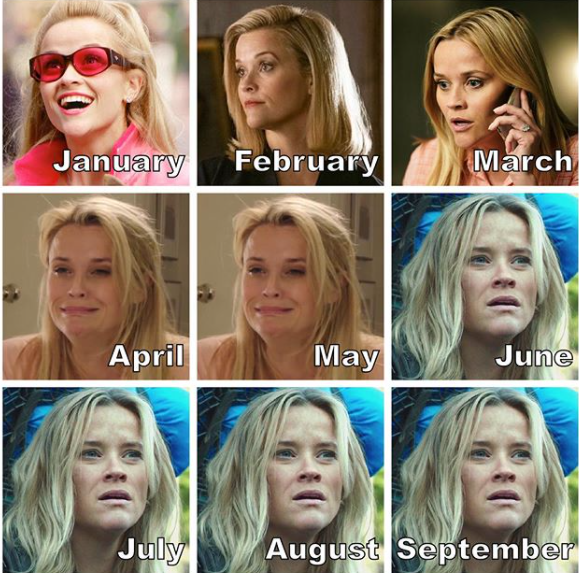 Whether Reese Witherspoon was the first person to post this type of meme – with facial expressions becoming more dire as the partial 2020 calendar progressed – hers was the first official celebrity version to go viral. As a result, the 2020 challenge became the Reese Witherspoon challenge, and thousands took the actress up on her dare. Our favorites? 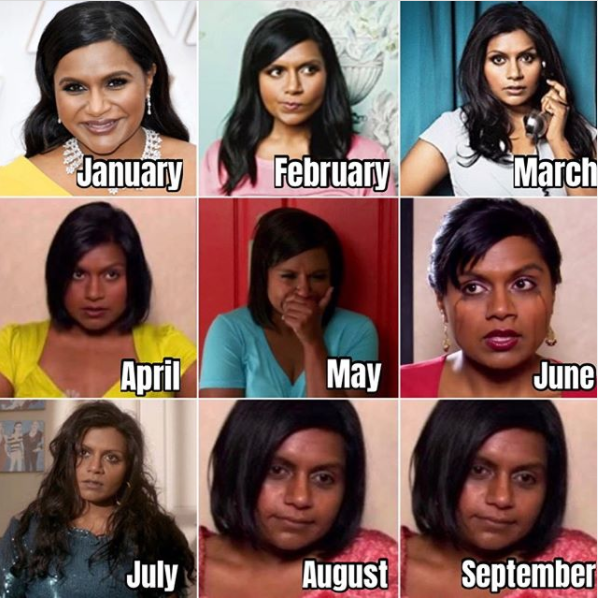 Actor Mark Ruffalo took a different approach, using his aptly-angry Hulk character to describe his feelings about the latter half of 2020 thus far: 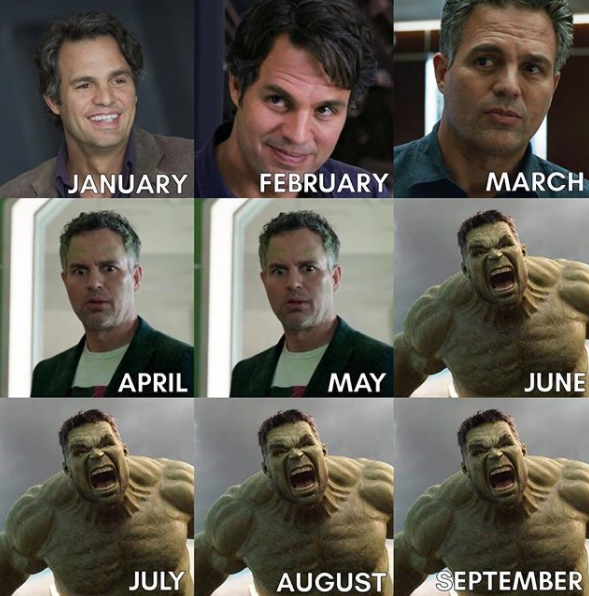 However, our favorites are from instantly recognizable corporations (most likely because they’re a great representation of a brand capitalizing on social media the right way – by humanizing themselves via participating in a viral trend – and that’s something that truly speaks to us here at Vizion). It was difficult to choose, but the best by a slim margin is this one from Hostess, who just refuses to let the events of 2020 rain on their parade.

You’d be this happy too if you were a Twinkie 💛 #2020Challenge #TwinkieTheKid #Twinkies #Twinkie #TTK #Trending #Joy #Smile #TreatYourself #Love pic.twitter.com/z3QOxpq9Da

(For more hilarious, brand-focused 2020 Challenge results, don’t miss the compilation by our friends over at Adage.)

Of course, amidst all the craziness that was the beginning of the year – and the memes it spawned – people found themselves spending more time at home than ever. While most of us used the time to complete the same amount of work we’d normally have done from the office, we hear that others used the time to access social media, bog down Netflix servers, and spend more time online gaming than in 2019 combined. The result?

Me when someone asks what day it is pic.twitter.com/1lhUh4eRUh

For a span of several months, none of us really knew what day it was. Without the normal daily routine and its timestamps – including waking up and heading off to work or school – and little to distinguish one day from another, we felt lost. This video meme summed the conundrum up perfectly.

Finally, despite the chaos that has been the first eight months of 2020, we’ve come full circle. While COVID-19, earthquakes in the Carolinas, hurricanes in the Gulf, wildfires in Australia, and international conflict are no laughing matter, it’s important to be able to laugh at ourselves – and the situations 2020 has put us in.

Me as I join all my Zoom calls: #TigerKing pic.twitter.com/8yHOHzB9jq

Because, at the end of the day, doesn’t a well-placed Tiger King meme truly say it all? We aspire to the optimism and spunk with which this Twitter user is approaching this new world of online meetings, e-learning, and virtual interactions. After all, 2020 has thrown at us, the ability to face the remaining challenges 2020 (and 2021, 2022, et al.) will bring our way with a smile and a joke is what we’d call a silver lining. 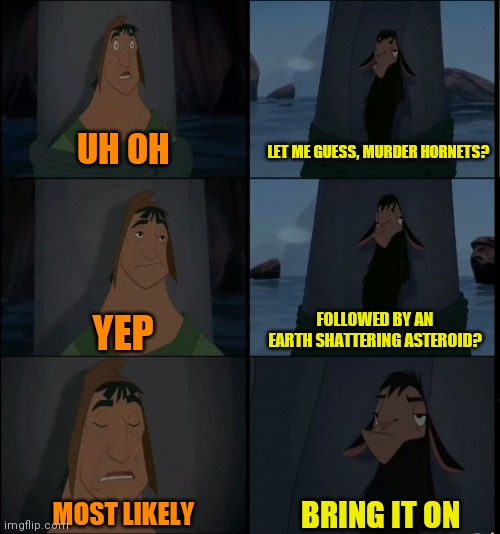 Whatever the next months bring, we look forward to seeing how internet users will skew it for our enjoyment! Bring on the memes.