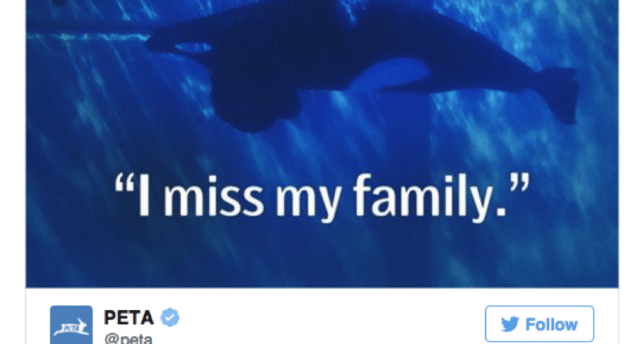 Social media is a relatively new platform on the digital media marketing game, leaving plenty of room for mistakes, mishaps, and miscommunications. Even the biggest corporations make social media blunders, ranging from slightly embarrassing to full-on catastrophes. Being a scapegoat for social media fails isn’t an easy job, but someone has to do it. Here are a few cringe-worthy moments that can teach us all.
DiGiorno Pizza – #WhyIStayed

After the release of disturbing video footage showing Ray Rice punching his wife, the hashtag #WhyIStayed trended around social media as a poignant message from abused women explaining what made them remain in violent relationships. Like many brands, DiGiorno Pizza was simply looking for a way to join the conversation when they tweeted “#WhyIStayed You had pizza.” However, they missed a crucial step – understanding what the hashtag was about. Four minutes later, DiGiorno tweeted an apology for its severe lack of tact, explaining that the brand did not read what the hashtag meant before posting. 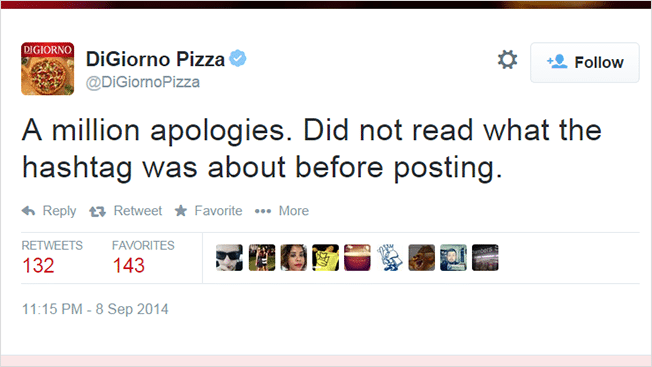 Lesson: While it’s important to get involved in current trends and popular hashtags, it’s even more important to understand what you’re posting before publishing. Do your research into a topic to develop an educated opinion or at least publish a post that won’t offend scores of people. Capitalizing on trends isn’t a crime, but doing so without respecting the core of a topic can make your company look callous and insensitive – a reputation no brand wants.
SeaWorld – #AskSeaWorld and NYPD – #MyNYPD

After the controversial documentary about SeaWorld’s inhumane practices, Blackfish, aired, the uprising against the theme park made global headlines. In an effort to smooth things over with fans, SeaWorld launched a Twitter campaign with the hashtag #AskSeaWorld, encouraging users to ask any questions. In light of the bad blood between the company and the community, this campaign acted as a door for criticism rather than clarity.

Users immediately took the opportunity to bash SeaWorld for its tactics, replying with tweets such as “@SeaWorld why do you provide more area for us to park our cars than you give these animals to live? #AskSeaWorld.” The campaign did more damage than good for SeaWorld’s reputation. As more and more negative replies rolled in, SeaWorld ended its campaign in the hopes of stopping what it had accidentally started. 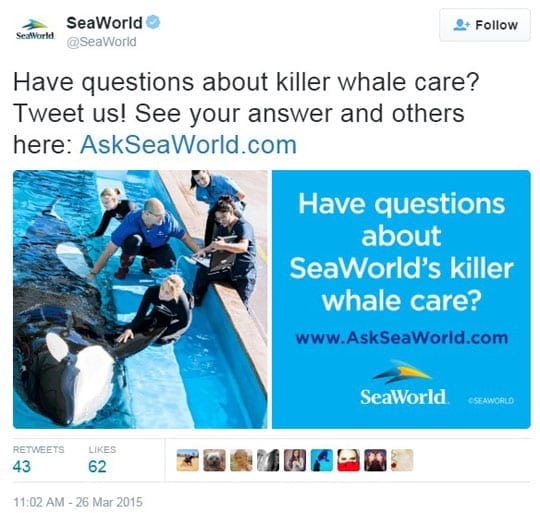 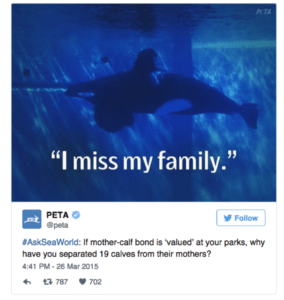 In a similar social media blunder, the New York Police Department started the #MyNYPD campaign after negative press about police brutality. The NYPD asked users to share a photo with a member of the force on Facebook with the custom hashtag. In a matter of minutes, users uploaded dozens of photos of disturbing police brutality, complete with the hashtag #MyNYPD. Asking the public to chime in on a controversial subject backfired in this case and even sparked others to post similar photos of their cities’ police forces. 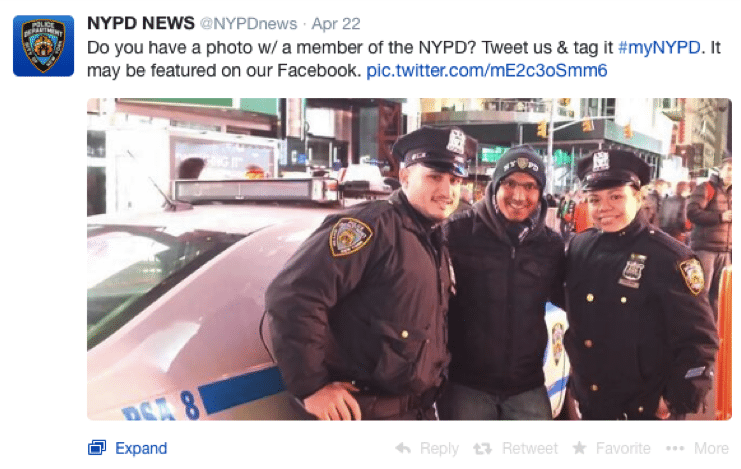 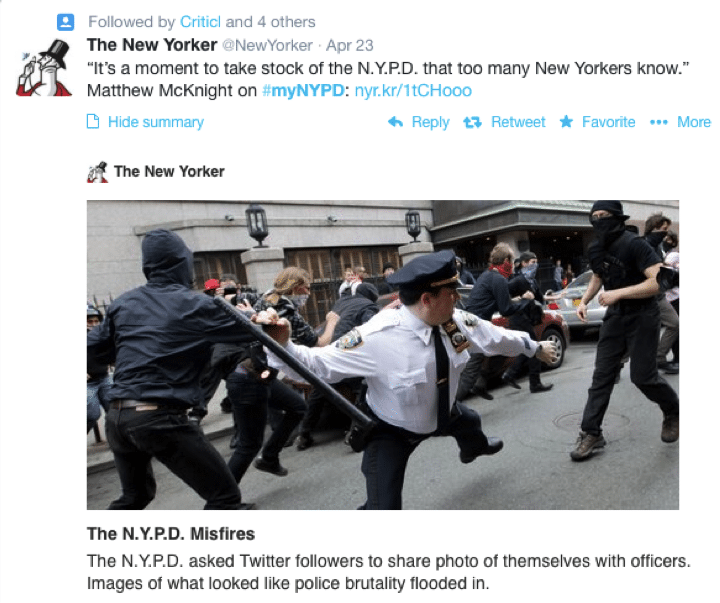 Lesson: Use a certain level of foresight before going public with a post. Try to predict the reaction your consumers will have before committing to a campaign idea. If there’s any chance your campaign will backfire or injure your brand’s reputation further, it’s best not to post at all. Get a feel for your target audience, engage with them respectfully, and do your best to avoid mega backfires. Posting about a controversial subject always presents a risk. Tread lightly and if you’re in doubt, don’t press “Post.”

IHOP – Inappropriate Humor
IHOP thought it was being clever when it tweeted, “Flat but has a GREAT personality” with a photo of a stack of pancakes, and another with “The butter face we all know and love.” What the brand assumed would be a hit turned into a total misfire when users began angrily replying about how offensive the post was. To fans, the posts were incredibly sexist and cruel, making remarkably rude comments that catered to ideas of discrimination and body image issues. 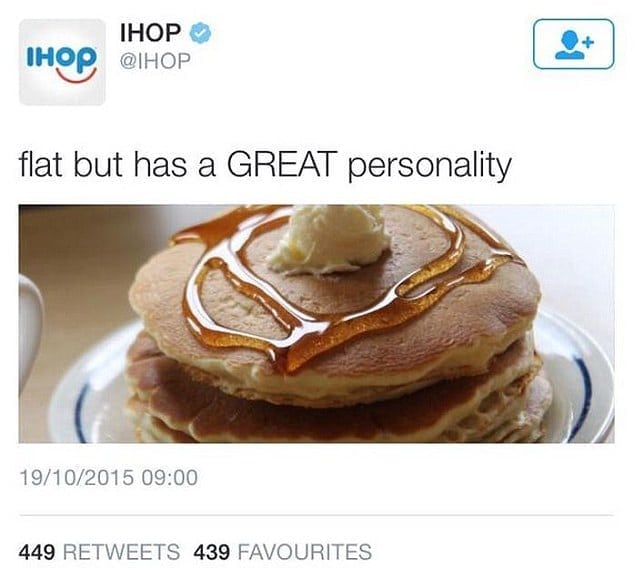 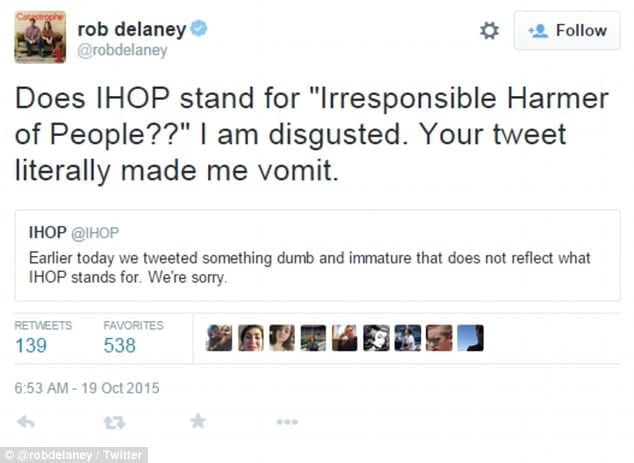 Lesson: If you think your post is even slightly offensive, it’s better to refrain. What some people see as funny and lighthearted, others may take serious offense to. It’s one thing to add comic relief to your posts, but make sure you do it in a way that doesn’t ostracize consumers or promote discrimination. It is possible to take funny too far, resulting in public backlash or an outcry against your brand. Today’s consumers appreciate a brand that can be witty and respectful at the same time.

Social media fails can permanently damage a brand’s image, stealing the spotlight from years of careful campaigning with a single poorly executed post. The digital universe is eager to consume well-played social media posts and equally hungry to shame brands that get it wrong. You should research topics before blindly joining the conversation, and take time to consider a post’s potential repercussions. When you take to the social sphere, be sure you think before you post.