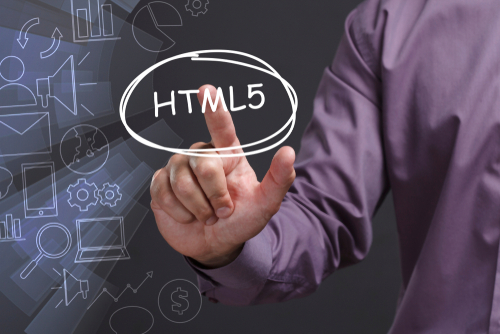 For those without no knowledge of website development, terms such as HTML can seem like jargon at best and foreign at worst. However, HTML is essential to our everyday web experiences and even more crucial for those wishing to pursue web development. What is HTML? What is HTML5? What are the differences between HTML and HTML5?

HTML stands for Hypertext Markup Language. However, without an understanding of what a markup language is, HTML remains difficult to define. A markup language serves to present, define and process text. In the same way that manual “marking up” of text prompts changes of that text from the writer, markup languages carry out text annotations and embedded tags to make processing text easier for your computer.

Though HTML has been around since the late 1980s, it took a bit more time to become the world wide web standard. In 1997, the World Wide Web Consortium (WC3) developed the standard for HTML. The WC3’s goal was to provide an international language for the web so coders could collaborate using the same language.

HTML remains the most-used markup language, and is the primary language of the internet. Since the majority of web pages exist in some version of HTML, developers producing new content can guarantee exactly how content written in HTML will appear, behave, and interact with existing pages. In short, almost anything you read or interact with online was produced in HTML.

At the time, every single markup tag for structures such as headers and paragraph elements, styles such as font, and so on existed in long form, using the ‘<’ and ‘>’ characters to separate each tag. It is your browser’s job to read the tags associated with each text and formulate the entire page of content into a readable user experience using the instructions provided by the tags.

How Has HTML Changed Over Time?

In the beginning, the WC3 kept individual style and structure tags separate from each other as well as within categories. This resulted in a very large language that grew larger over time as more tags came into existence. Eventually, style tags and structure tags became separated, leading to the creation of style sheets that defined the style of entire pages with the addition of one file instead of multiple separate tags.

Elements of core HTML still in existence include the content-defining elements. However, multiple additions over time have reshaped HTML into a markup language that incorporates many new features. Significant new versions of HTML include:

HTML5 is the current reformulation of HTML, and aims to provide a more efficient experience for users. HTML5 is still a markup code like its predecessors, and functions as the fifth version of HTML since its initial development. Like any new version of a web element, HTML5 addressed issues with a previous version.

In order to understand the updates that took place to transform HTML 4.0 and XHTML into HTML5, consider the changes to the internet that took place between 1999 and 2014.

Neither technology nor the spread of internet access will slow any time soon. Therefore, WC3 determined the aim of the new world standard in markup language should be to provide a uniform experience across the web for users and developers worldwide, as well as a smoother experience across devices.

What Are Improvements in HTML5?

Primarily, WC3 and its collaborator, the Web Hypertext Application Technology Working Group (WHATWG) wanted to reduce HTML’s reliance on plugins. In addition, the groups wanted to improve the way HTML handled errors and reduce scripting. These changes made the development of web applications much more streamlined.

In addition, HTML5 allows web pages to eliminate the need for cookies by storing data on the user’s browser, increasing load speeds across the internet and increasing consistency across browsers. Similarly, elimination of the need for plugins increased consistency across browsers for videos and other media. Another key feature of HTML5 added video and audio playback controls directly within the browser.

How Does HTML5 Differ From the Original HTML?

As HTML5 replaces HTML4, many sites still use HTML4. All browsers still support HTML4, and older browsers can overlook the properties of HTML5 and read similarly to HTML4. As developers continue to implement changes, HTML5 will evolve over time, much like pre3vious versions.

In the same way, a large number of changes occurred in the years between 1997 and 2014, transforming HTML into what we know as HTML5 today. Specifying the actual differences is a pretty lengthy list.

In addition to the previously mentioned new features of HTML5:

Certainly, this is not a complete list of updates and features that took place over the nearly 30-year history of HTML. HTML5 is still changing, and more updates will surely come. However, HTML5 largely meets its goal of standardizing the web experience across platforms as well as around the world. The differences between HTML and HTML5 will continue to develop in years to come.