We’re grateful to have positive client testimonials, and our portfolio can give you an idea of the work we do. But nothing illustrates successful digital marketing work better than case studies. We don’t just talk about results—we get them—and you can see some of those results here.

Worthington Direct wanted to move from their custom-built CMS and ecommerce platform to a leading vendor supported solution, that had more native features to enhance the functionality and capabilities of their public facing website/ecommerce store, and a more robust fulfillment back end that would increase efficiencies in managing products and orders.

As Vizion has worked with Worthington Direct for over 15 years and built up a strong organic presence for some very competitive keywords, the site migration onto a new platform needed to have as little negative impact on organic traffic as possible.

Vizion’s approach was to ensure that the migration did not also include a redesign but tried to keep the number of changes to a minimum. With any platform change, there will naturally be some changes in site architecture, internal linking and page template code that can’t be avoided. Adding a redesign to the project not only adds to the overall cost, but also adds another layer of complexity in being able to compare performance pre- and post-launch.

As the staging site was being built, it was compared to the production site, to document any differences in the platforms and provide solutions to get ahead of any potential SEO issues.

Vizion also coordinated with other marketing channels to ensure that their landing pages and digital assets were also accounted for and didn’t add to any potential unforeseen disruption or complexity.

Vizion worked directly with the development team to document, prioritize and QA any issues that arose and ensure that they were taken care of quickly. This is a critical step, as search engines will usually increase crawling when they find broad changes to a site, so any issues needed to be addressed quickly.

The new site launched mid-January 2022 and since then rankings have not seen the typical site migration traffic dip that many other sites experience with these types of changes. When looking at the spread of non-brand organic rankings on Google from the month prior the site launch, to the month post-launch, we see an 11% gain in top 3 rankings and a 5% gain in in top 100 non-brand organic rankings, as shown by the table below: 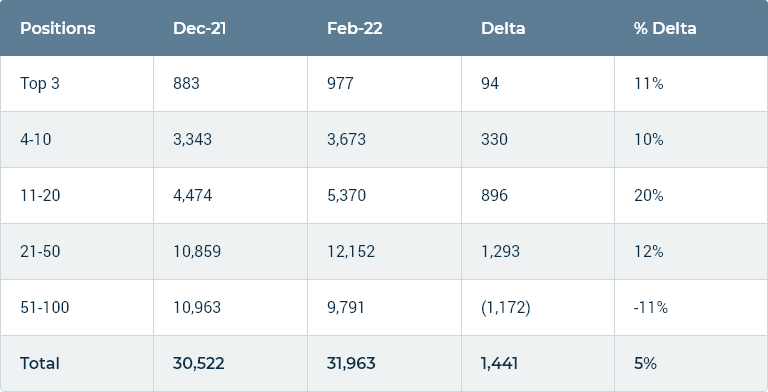 Looking at the data further we see two major improvements in rankings:

Worthington Direct experienced a 22% increase in traffic and a 155% increase in transactions from the organic channel year-over-year. Revenue is at an all-time high and they’re now looking to Vizion to help them expand into new areas.