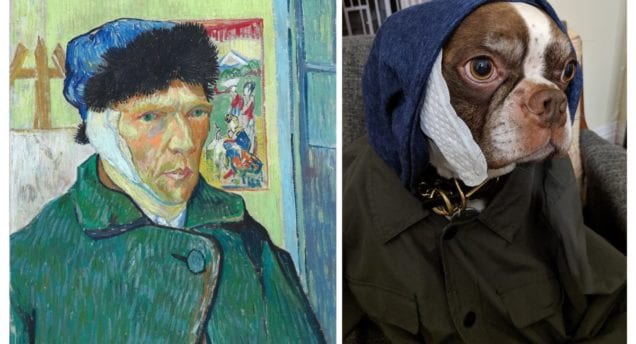 The importance of becoming fluent in social media to successfully promote your business and interact with your customers is common knowledge. However, using social media effectively comes with its own challenges. The digital landscape is prone to rapid changes. If brands take too long to react, their content can be perceived as forced, insincere, and ultimately irrelevant.

With these constant shifts, it can be difficult to keep up with trending topics, but it’s an integral part of maintaining an online presence. Life during the pandemic is no exception. Since COVID-19 began impacting people’s lives, relying upon social media has become more important than ever. With shelter-in-place orders and quarantine, users are spending a significantly increased amount of time on the Internet and social media. This presents a golden opportunity for brands to really make an impression. Here are some examples of 7 brands doing social media well during COVID-19.

The Getty Museum has demonstrated an excellent way of remaining relevant despite being largely inaccessible due to the pandemic. With the risk of infection high, museums have been forced to close their doors. But the Getty Museum found a way to promote the arts and encourage patron interactions at the same time. They launched the “Getty Museum Challenge” on their Twitter page, asking users to recreate their favorite works of art with household objects. This resulted in a large amount of user-generated content as those stuck at home looking for ways to pass the time latched onto the challenge with excitement and creativity. The team at Getty Museum realized that a well-crafted social media challenge is a great way to go viral on social media. They pulled it off without a hitch.

Denny’s has had a bit of an advantage given their already popular reputation online as a source of humorous, shareable content. Although they initially took a break from social media at the start of the outbreak, they’ve been as successful as ever since their return. As people began relying on Zoom to conduct their business meetings and the use of digital backgrounds became more commonplace, Denny’s released their own selection of backgrounds, most of which were designed to make it look as though the user were dining in at one of their franchises. They were conscious enough to take a hiatus in order to remain respectful of people’s genuine fear and pain, however, they’ve also been able to provide some well needed comic relief in these uncertain times.

IKEA is a great example of focusing primarily on building trust with your base instead of simply trying to sell a product. There’s generally an understanding that the promotional content created by brands on social media is ultimately meant to help increase their sales, which can make any attempts at compassion feel fake. However, in some cases, this can be done effectively.

IKEA managed to do exactly that with their #StayHome campaign. The purpose of the video they shared on social media was to encourage people to cherish their homes as they found themselves quarantined within their own walls. No IKEA products were featured, and no mention of their online services was made. It might seem a little counterintuitive for such a big brand to make no attempt to bring attention to themselves, but in simply relating to the experiences their customers were going through, they came across as genuinely caring.

British Gas, an energy and home services company in the UK, did an amazing job of providing for its customers despite being limited in their capacity to do business as usual. For starters, they created a series of instructional videos to help people perform minor repairs at home. That way, folks unable to call for assistance with solving “non-essential” problems were given the tools to solve said problems all on their own. This approach of offering relevant, useful information was very well received and much appreciated.

In addition to that, British Gas also released videos that took viewers “behind the scenes,” so that they could see for themselves what kind of new safety measures employees were taking to keep their customers safe. This gives viewers of the videos confidence in the company’s promises and humanizes their workers, making the company as a whole feel relatable.

Some companies are trying out brand new social media strategies altogether, including industry giant Coca Cola. Back in April, they announced that they were “donating” their social feed to partner community organizations, allowing those organizations to publish posts from the Coca Cola social media accounts. Posts shared included a message from the American Red Cross asking users to do their part and stay home, another from Food Banks Canada asking for donations, and another highlighting the essential work done by staff at the Boys & Girls Clubs of America, among others. By taking a back seat and elevating the messages of organizations dedicated to serving the community on their platform, Coca Cola was able to demonstrate their own commitment to giving back.

As states work to figure out the best lockdown durations and procedures, many organizations have found ways to transfer their services to a digital format. Cincinnati Zoo & Botanical Garden is an excellent example of such a transformation. Given the fact that they were unable to welcome visitors in person, they created a daily “Home Safari Facebook Live” event. Every day they go live for about 20 minutes to highlight a different animal and walk kids through creative, related activities.

Viewers are welcome to interact with the video by submitting questions, which zoo staff can then answer on the spot. Educational and fun, Cincinnati Zoo has put together a welcome tool for parents looking for ways to keep their kids stimulated while schools remain closed.

What’s most interesting about the Domino’s approach is actually the format they used for their messaging. Back in April, Domino’s released a recruitment video featuring franchise owners from various locations. The message in the video is pretty straightforward, as the speakers acknowledge the changes they’ve made to continue operating during the pandemic and ask viewers to apply to join the team.

However, all the footage used in the video is from a Zoom call, an app that most of their customers are familiar with by now. Using that familiar layout gives viewers the feeling that we really are in this together, as we all do our best to adjust to new ways of communicating.

The Importance of Simply Being Present

This list is just a small sample of the amazing creativity and effort we’ve seen over the last several months, but each of these examples serves as an opportunity to learn from the success of others. The strategies are varied, but ultimately the goal is to increase engagement with customers, connect on a personal level, and show that you care. These are stressful times, and being able to offer some form of comfort, whether that’s in the form of a funny distraction, an activity, a tutorial, or a relatable story, is ultimately the key to being successful on social media.