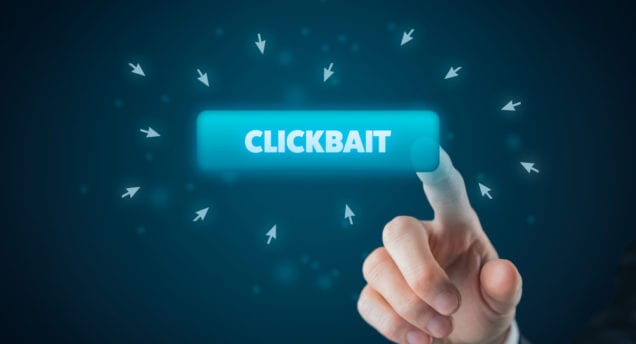 In this time where fake news is under fire and authenticity is constantly in question, clickbait is almost a dirty word. To be sure, the clickbait title is one of the most familiar examples with everything that went wrong as the internet became more and more infiltrated with headline news, product advertisements, and other countless sources of easily accessible information.

Years ago, as the amount of business, news, and advertorial pages increased steadily, a consumer surfing the web was faced with a decision nearly every time they opened a browser – which content deserves a click? For many of us, the answer was simply, “the choice with the most appealing headline.” As copywriters and webmasters were forced to compete with the influx of more websites within the same content area, however, tactics to draw in users became more and more blatant, resulting in the rise of what we now know as clickbait.

While the actual definition of clickbait tends to vary depending on the source, most experts agree that clickbait is a story promoted by an eye-catching title that entices users to click to access all the information contained on that particular URL. In essence, the title and description serve as the “bait” to garner the clicks that will land traffic on the web page in question. However, that’s where the details get murky – is the title itself considered the clickbait? Does the content of the webpage matter?

Most of us have become accustomed to what is perhaps the most well-known example of clickbait – the titles and articles appearing in the ad space at the sides and bottoms of legitimate web pages, angling for traffic with headlines like “You Won’t Believe This Weight-Loss Trick!” The titles are near-obvious exaggerations, but they tug at our curiosity all the same. After a click, however, it becomes clear that the content on the page is often shoddily written, and in most cases exists only as a thinly-disguised advertorial masquerading as a news story.

By now, most people that frequent the internet know what to look for when it comes to clickbait. However, we’re still falling for all but the most stereotypical examples. To put it simply, while most of us are aware that someone didn’t lose 100 pounds in six weeks, we’re still drawn in by titles that tempt us with eye-catching information – oftentimes, enough to click on the associated URL.

Clickbait stems from a journalistic principle that’s been around since the early days of sharing information; write a great headline that appeals to the user’s curiosity, and promise the rest of the story after the user commits. Clickbait is simply a result of copywriters ramping up their efforts to draw in users who have more and more content to choose from and since curiosity is human nature, we’re often willing to take the chance that the content is worth it.

Should You Use Clickbait?

Of course, most of us are now aware that true clickbait titles often aren’t worth the click. If you’re a business owner wanting to build legitimate traffic to your website, it’s not wise to draw in users with titles like “It’s Shocking How Quickly You’ll Become a Millionaire With This Simple Trick!” Even if you get some clicks, you’ll increase your bounce rate, and so it’s a losing situation.

However, the basic principles of clickbait titles that appeal to those who click on them can still prove useful for legitimate businesses. Consider these tips for constructing a title and content that cashes in on reader curiosity without entering into true clickbait territory:

At the end of the day, one of the hallmarks of the true clickbait article is the utter lack of followthrough. If your content is solid and provides the reader with what’s promised in the title, you’ve built anticipation, enticed the user to click, and then provided them with a fulfilling payoff for their efforts. Clickbait still works, and with some simple tweaks to ensure your title isn’t misleading and your content is worthwhile, you can use its basic principles to work for your business.