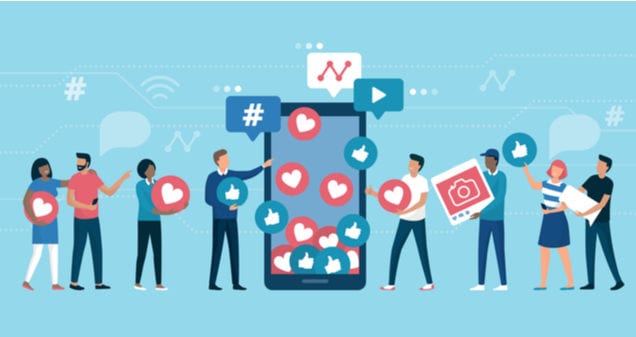 We live in a world where a large amount of marketing and advertising has transitioned from television screens and radio waves to social media sites. It has become very commonplace to see large companies interacting directly with their customers on places such as Twitter, Instagram, or Facebook.

This expanded digital presence is critical for two reasons. The first is visibility. People spend most of their time online browsing through social media sites, not watching cable TV, and as such are more likely to come across an ad on the Internet. The second is the viral nature of online sharing. Publishing the right content can allow your brand to start trending worldwide with minimal cost, as your customer base ends up promoting said content for you free of charge. This form of engagement also tends to feel more personal and intimate to users, who are used to seeing the faces of their families and friends on the same platforms. As such, people are more likely to trust and become invested in businesses on social media.

Some brands have been particularly effective at using social media for their benefit this year. Take PlayStation, for instance – the brand with the most followers on Twitter. The secret to their success is a constant influx of content. With how fast-paced modern users process information, it is crucial to be extremely active on social media to be successful at retaining and attracting followers. PlayStation achieves this by consistently publishing a stream of game trailers, gameplay footage, and streaming events. PlayStation has also launched campaigns on via their social media platform, including their #PlayAtHome initiative that allowed product owners to download two extremely popular games for free.

A deceptively simple strategy to make a splash on social media is one that social selling app Depop utilizes – relying on user-generated content. A vast amount of the material shared on the company’s account is simply reposted from their customer’s pages. Those whose work is promoted get the excitement of being recognized by one of their favorite brands. In exchange, Depop gets stellar content for free, on top of giving their page a more personal touch.

One final strategy is to enter the world of Gen Z and employ the use of memes to better relate to current consumers. This is ultimately what’s helped make Chipotle so successful online. They were one of the first brands to branch out onto TikTok, a video sharing app. TikTok is most commonly used in the creation of trends and challenges users can then attempt and tag in their own videos. Chipotle cleverly integrated themselves into the app by creating their own challenges, earning them hundreds of millions of views on the platform.

Unfortunately like any tool, social media can end up doing more harm than good if used improperly. In today’s era of information and cancel culture, the old adage asserting that “there’s no such thing as bad publicity” rings hollow. It’s important to tread into today’s digital landscape with care; a lesson that some brands have been forced to learn the hard way in 2020. For instance, let’s look at Disney’s ill-fated attempts to drum up some excitement for the annual fan-celebrated “Star Wars Day,” which takes place on May 4th. Disney is a corporate giant and no stranger to the marketing game, so it may seem peculiar to start this list of blunders with such a powerhouse, but that just goes to show that in the world of social media, everyone is on equal ground.

The company attempted to follow Depop’s footsteps by using user-generated content, asking for fans to share their favorite Star Wars memories with the hashtag #MayThe4th. However, they then added a disclaimer stating that anyone using the hashtag was automatically agreeing to allow Disney the use of their message and account name. Disney has always been strict about content rights, and this shows that their presence on social media is no exception. But content on social media is far more complex, and a brand cannot simply claim ownership of someone else’s posts by making a sweeping statement like that. They were mocked so thoroughly by users on Twitter that they attempted to backpedal several hours later, but by then the damage was done.

Another danger of using social media is the way it can make well-meaning gestures seem cheap and hollow. Back in January, grocery store Aldi paired up with an influencer to launch a challenge of their own, the #AldiPoorestDayChallenge. The idea was based on the fact that January 24th is sometimes referred to as the poorest day, as the post-Christmas bills start arriving. The challenge required the influencer to attempt to shop for her family of four on a budget of only $32 for the week. Though Aldi’s intentions were to demonstrate how far you could stretch a small amount of money with their low prices, the whole challenge was perceived as highly insensitive to families barely scraping by on budgets even smaller than that and turning their struggle into a silly little game.

OneUnited Bank found themselves in hot water for similar reasons later in the year. In an attempt to honor Harriet Tubman for Black History Month, they shared a new debit card design featuring a picture of her. Given the weight of Harriet Tubman’s contributions to history and her distaste for capitalism, it seems inappropriate for her to be displayed on cheap plastic. Unlike dollar bills, which are printed by the government, debit and credit cards can often be customized with any picture you like, including silly cartoons, dogs, or pretty backgrounds, and the whole thing was ultimately labeled as simple pandering and dismissed as utterly offensive and disrespectful to her memory.

While it’s not entirely impossible to deal with serious issues on social media, it’s important to realize that you are still being perceived as a brand, and as such, you run the risk of appearing to have an ulterior motive. Listening to feedback, working with your users instead of against them, and avoiding the trivialization of controversial, important topics is key to maintaining a successful online presence in 2020.