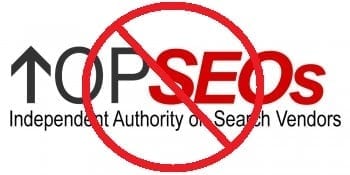 Go ahead…search for “topseos.com” on Google. You won’t find that domain. And, interestingly enough, you also won’t find their main domain/home page for the same search on Bing.
Here’s a little story about how that may have come to happen…

As many of you may know, I have been on a rant – for years – about the practices of TopSEOS.com.
Here’s a rundown of some of my posts:

If you think I’m the only one writing about this, or considering these kinds of things, think again:

*I could have included many more references.
TopSEOS.com has said that they review SEO firms to determine “the top SEO companies”, by interviewing clients/customers, etc.. As someone who used to participate in this scam (let’s call it was it is), when I was President of another SEO company, I can tell you that never once did anyone from TopSEOs ever reach out to our clients to so much as confirm that we even worked with them, much less whether or not we did SEO for them.

A few weeks ago, I received an anonymous email from someone claiming to have worked at TopSEOs.com. They “had to leave” because the business practices of TopSEOs sickened them.

Here’s the email thread, in its entirety:

To: Jackson, Mark
Subject: topseos.com
Hi Mark,
I hope you’re doing well. I’ve read with great interest your past articles regarding the fraud that is topseos.com and I’m wondering if you’re curious to know any of their dirty little secrets because I know most if not all of them!
J.B.
On Mon, Sep 15, 2014 at 2:32 PM, Jackson, Mark wrote
Pretty sure I know what’s what, but happy to listen to your story.
Whatcha got? (and please send me your Linkedin bio link, so I know “what I’m talking to”.
Thanks,
-MJ

To: Jackson, Mark
Subject: Re: topseos.com
No LinkedIn bio, sorry Mark. This is obviously a fictional name and email, I have to somewhat protect my identity given my past experience with Topseos.com, I actually used to work for them in a [redacted] capacity for about [redacted] months until I quit because I couldn’t stand how badly they were ripping people off and flat out lying! I’m not even sure where to start but I know I would like to see that company and website burn to the ground! The only real threat to Jeev Trika and his business of fraudulent “ranking and review” websites is Google and he’s managed to dodge that bullet for quite some time. Like I said, not even sure where to start….

1-They write a TON of fake reviews, his new thing is reviews on the fly. Check out www.bestseocompaniesreviews.com (one of his mini-sites) do you really think 50+ companies or people took the time to write reviews for Netmark and Boostability (his two biggest sources of revenue by the way) They keep most of the fake reviews and black hat SEO to the mini sites.

2-Scraping content and data, I know they have been accused of this in the past and it’s a common daily practice for them. Anytime they launch a new site his team in India will scrape content for it.
3-Stealing copyrighted content, yet another daily practice for them.
4-Press releases, yeah not much to say here, I’m sure you’ve seen the many, many, many, many releases they put out on a monthly basis. All produced in house and all CRAP!

5-The REAL shocker…they have NEVER EVER reviewed or evaluated a single company in their history! Yes, I’m sure you already know this but it’s such a blatant lie and very deceiving to the public in general and I just don’t get HOW he gets away with it! You don’t want to pay them a minimum of $1,000 per month, they will whack your company off the list or even worse make you like #96 or something.

Mark, I know you’ve utilized topseos.com in the past and said you saw some ROI as a result but what you don’t know is how many companies have paid him thousands and thousands and got ZERO ROI! It’s just a money grab for him, look up the word greed in the dictionary and I’m sure you will see a picture of Jeev Trika next to it! He will squeeze you for every dime he can and when you decide you don’t want to pay anymore it’s on to the next sucker!!! Below is an incomplete list of websites he operates, all under the same model. I just wish I knew how or why he continues to get away with what amounts to robbery in my eyes, in addition to the fake facade of being a genuine independent third party review site, the biggest lie of them all!

So, along with this email, this person attached a document showing 86 advertisers using TopSEOs services. One of these, I actually know personally. So, I reached out…

Without naming names, I will tell you that this individual shared with me that they did, in fact, spend upwards of $15,000 per month on advertising on these sites. They agreed that there was never once anyone from TopSEOs or affiliated companies who reached out to any of their clients to confirm that they did business with them, and – keep in mind – they had been advertisers for several years. Why did they continue to do this? Well, as you might suspect, they got ROI…Leads. Bunches and bunches of leads and new business. For those looking for an “unbiased recommendation of an SEO firm”, these sites supposedly “answered the call” and provided what so many are looking for…an easy way to identify the good SEO companies amongst all of the smoke and mirrors or snake oil that does exist in our Industry.

While I had written many articles about my feelings with regard to TopSEOs, and others who provide these “top rankings”, I thought I’d try one last time to make a difference.
I forwarded the email thread to Matt Cutts.

While I cannot confirm (and will most assuredly never be able to confirm) that Matt took action, I can tell you that the timing is interesting on what happened next.

Search for any of the domains included above in Google. Gone.
Most ironically, Visibilitymagazine.com. Not exactly “visible” in Google, these days. But, you can see that Jeev is apparently trying to stay in front of this, by launching VisibilityMag.com, which is in Google’s index; but not Bing’s. *BTW – it appears as if some of these other domains may be also experiencing issues with Bing. I haven’t taken the time to review each of them.

Why doesn’t anyone ever talk about a Bing Penalty, btw?? What animals might they “launch” related to “Bing Updates” that would be of interest for discussions in the trades? Since Google has apparently gone with the “P” animals (Panda, Penguin and Pigeon), I might recommend that Bing go with all of the awesome “O” animals such as Octopus, Oyster or Otter? Then, we can all say that sites suffering from penalties related to updates from Google and Bing would be “P.O.’d”.  *You can thank me later*.

But, I digress…
While I’m feeling a bit of relief that something good has happened for our Industry, I do not like that anyone has to be harmed from this. Certainly, anyone working for TopSEOs and its affiliates are harmed, the advertisers for these websites are undoubtedly not seeing the number of leads that they once did. New business won’t be coming in like it did before for these advertisers. Folks might lose jobs. I mean, that’s reality. And, being human, I don’t like that part of this. But, then again, how many jobs could have been added to other good SEO firms that were losing out on these opportunities because they refused to participate in the scam? I know that when I bootstrapped Vizion Interactive, it would have been a helluva lot easier getting things off the ground had I decided to “go soft” on my moral stance.
Truth is – it never should have come to this.

I wish that Jeev would have simply done the right thing, in the very beginning. Be honest. Perhaps you should have sold a service where you honestly reviewed/vetted SEO companies for individuals/other businesses. By misleading folks into believing that you were actually reviewing companies, you have done a lot of harm for this industry (while rewarding companies who simply paid to get leads/business; many of them VERY aware that there was never a review process…you simply rewarded those who were willing and able to spend the thousands of dollars per month it took to be “in your good graces”).

My bet is that Jeev is going to continue to develop new sites, perhaps purchase additional domains, and hope to keep his “business as usual” approach. My hope is that Matt (or whomever took this action) will continue to be diligent and help us remove these fake review sites, so that our Industry no longer has to contend with the “Top SEO Company” promotions from operators such as this.

Update: Jeev has apparently re-launched at topseosglobal.com.
Update: We have been told that TopSEOs decided to shut down the booth at Pubcon.
Update: Jeev says “we’re not banned” on Search Engine Land
Thanks Ryan Jones for sending me this photo: