Most of us are familiar with just how viral YouTube videos can be.  From funny to risqué to talent-focused and everything else imaginable, just the right format can cause a YouTube video to be shared with millions, world-wide.  Each and every one of us has both received as well as forwarded YouTube videos we felt worthy to be shared.  So what defines worthiness?  Let’s look at the Orabrush story and decipher.

Orabrush was created by Dr. Bob Wagstaff, who was 75 at the time.  In order to get consumers aware of and buying his product, he first spent

tons of money on traditional advertising and trying to reach out to stores himself, all to no avail.  Frustrated and now with minimal funds, he then turned to Brigham Young University (BYU) to have a group of marketing students study his product and target market to determine the best way to sell it. They concluded the only way to sell the Orabrush would be online and that only about 8 percent of Internet users would be interested.  They told him to give up.  But one student spoke up saying that 8 percent of the Internet is huge!  And he agreed to work on the Orabrush campaign in exchange for Wagstaff’s vintage motorcycle.

What he came up with was absolutely brilliant.  He didn’t choose to present boring information on how the product was made, by whom, or anything of the like.  He put on his consumer hat instead and researched to see what consumers were actually searching for online that would be related to the Orabrush.  His research found the keyword “bad breath test” was consistently ranked first through fifth in popular searches.  That told him that Halitophobia, the fear of having bad breath, was real and a real problem.  A problem that the Orabrush could solve. 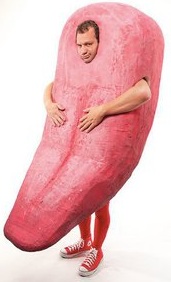 Using Halitophobia as an angle, this brilliant MBA student came up with a series of funny and engaged YouTube videos that featured Morgan, a giant tongue.  An app was also created as a joke.  It supposedly lets users test to see if they have bad breath.  The 99 cents app quickly became more viral than  video series, which had already taken off like wildfire.  An April Fool’s video was release earlier this year suggesting that the Orabrush purchase would be covered by Obama Care.  Morgan, the giant tongue, has become so popular that the video series now feature a “Diary of a Dirty Tongue” angle.  To say the videos went –and continue to be — viral would be an extreme understatement.  There is now even an Orabrush the Movie official trailer and Morgan even has his own Facebook page:  OrganMorgan

Even with the viral effect of the videos and the popularity of the product, Orabrush still had a hard time getting into Wal-Mart stores.  Comments on the YouTube channel even showed consumers asking why the Orabrush was not in Was-Mart but even with that, Wal-Mart would still not bite.  Until, that is, one local Wal-Mart manager did see the videos, tried the product, loved it and decided to carry it in his store.  From there other local managers saw the awesome display (yes, they featured Morgan and are fun and engaging) and wanted them for their stores.  But Orabrush still hadn’t gotten in to the Bentonville, AR store which was their primary target because it is Wal-Mart’s corporate offices.  So what did they do to get this store’s attention?

They brilliantly set up Facebook ads geo-specific to Bentonville, AR stating that Bentonville, AR Wal-Mart employees had bad breath and needed the Orabrush.  They got the attention from the store who then realized they knew exactly what they were doing with the product, with advertising online and everything about their product and ended up ordering an enormous amount of Orabrushes, all via email.  They didn’t even require a face-to-face meeting.  And it only cost Orabrush $28 in local Facebook ads.

From that, in September of this year, Orabrush evolved into being in Wal-Mart nationwide and is now being sold in Australia and the UK as well.  To date, over 1,650,000 Orabrushes have been sold and former Procter & Gamble executive Jeff Davis has joined Orabrush as their CEO.  Again… everything about this story is brilliant.  A true success story, all stemming from creativity, out of the box thinking and YouTube with a tiny amount of Facebook advertising.

For more information on the Orabrush story, see MBA Case Study:  How Orabrush Got Into Wal-Mart and be sure to click and view some of the many other Orabrush videos, such as Morgan’s Chopstick Duel With The Piano Guys.