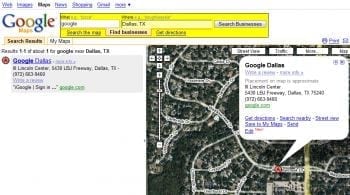 Google has decided to close their Dallas, Texas office. This is quite a surprise, especially because the Dallas/Fort Worth area has not seen a lot of the recession that the rest of the cities in the United States are seeing.

Mark Jackson, CEO of Vizion Interactive, had this to say about the closing of the Dallas Google office:

“I worked with many of the folks in Google’s Dallas office, while with AOL Time Warner. We were all let go at about the same time, due to the mess that was the AOL Time Warner merger. They moved on to Google and I moved to the Interactive agency side of things. For Google, a company with such a bright future and showing periods upon periods of solid growth, to be shutting down an office in a market of this size is pretty unbelievable. That said, I have been looking for a new business development person, so I’m sure that I’ll be giving these folks a call.”

“Mark Jackson and Bill Hartzer sit on the Board of Directors for the Dallas Fort Worth Search Engine Marketing Association (DFWSEM), which has recently published a press release, and comments of their own. To read more about DFWSEM’s position on this, visit the DFWSEM Blog or see the press release on Marketwatch.