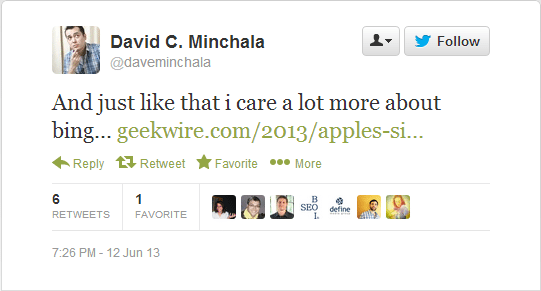 In case you haven’t heard by now, Apple announced Siri’s search will be powered by Bing:

Big news right? If you don’t think it is consider this:  At SMX West 2013 Covario predicted that by the end of 2013 mobile search will power 1 out of every 3 searches. This and the fact that local search is up to 73% via mobile devices compared to generic phrases at 58% (in desktop vs. mobile) Bing has certainly positioned themselves to split the market share.

Why hasn’t Apple done this before? Why now?

Siri used to use the default search engine that was selected in the iOS settings. For most users it was the default search for their desktop, Google. And just last year Siri had integrated Yelp into its search but when Google launched their own voice powered search it seemed like Google would dominate that sector of search even with the Yelp integration.

So why now? In my opinion, Apple is tired of putting free money in Google’s pocket. That coupled with the seemingly endless lawsuits going on between the two, Apple has finally woken up and realized “the enemy of my enemy is my friend”. But if the choice is Bing, is this really the right decision?

Bing doesn’t exactly have a history of returning the greatest search results. Even when they kicked off their “Bing-It-On” challenge they had some trouble getting it off the floor: 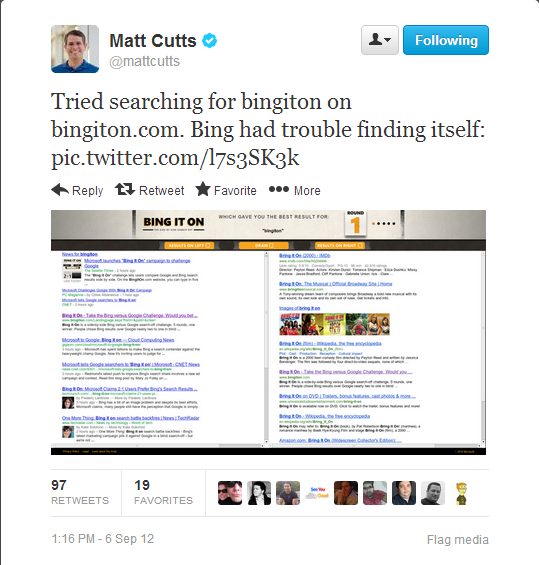 Will Siri’s results suffer from using Bing? Only time will tell, but with this increase in users Bing also gains data. Sweet, sweet user data!

The more I thought about it, the more I like this idea. Especially after hearing what Mirosoft’s Gurdeep Singh Pall had to say about it at SMX West 2013.  “The more users Bing can reach, the better it will get, based on machine learning technologies that shape and improve search algorithms as more people use a particular search engine, creating stronger feedback loops.”

This was really encouraging to read, especially since getting their algorithm publically compared in Wired and a mishap with their launch of “Bing-It-On.”

So here’s to the access to more data improving their search results and here’s ALSO to all of us getting that data!

Even since Google initiated (not provided) you can’t throw a rock without hitting a SEO complaining about it. So with Google providing less and less data, and Bing getting access to more data and hopefully not hiding it from their analytics, Bing is now going to be helping business owners out more than just offering another platform to compete on.

Bing may not be at Google’s level as far as their algorithm is concerned, but it’s becoming more and more clear that this partnership will help Bing out in more ways than just getting a bigger piece of the market share. Providing business owners with much needed data that Google was holding hostage is a big step in the right direction.

Does this mean Google is going to lift their (not provided) data? No. At least not until the Bing/Apple(Siri) partnership takes a considerable amount of traffic away from them.

At Vizion Interactive, we have the expertise, experience, and enthusiasm to get results and keep clients happy! Learn more about how our SEO Audits, Local Listing Management, and Website Redesign Consulting services can increase sales and boost your ROI. But don’t just take our word for it, check out what our clients have to say, along with our case studies.