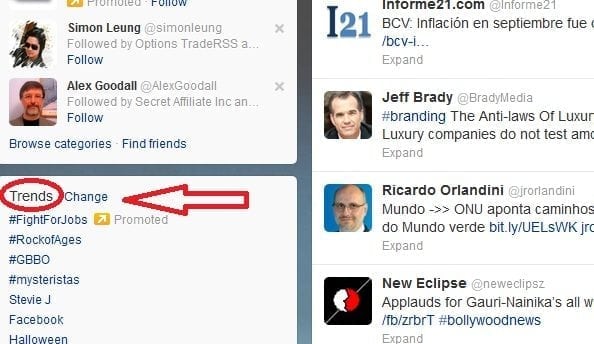 Twitter turned six years old in March of this year.  Yes, our little microblogging site is growing up so fast! With Wikipedia reporting over 500 million active Twitter users as of 2012, over 340 million tweets daily and 1.6 billion search queries per day, Twitter is definitely a powerhouse in the social space.

One of Twitter’s attractions is the trending hot topics and the ability for users to be part of the buzz in real time.  A Twitter trend is the hot, emerging topic currently being discussed on Twitter, usually with a keyword or topic related hashtag (#) attached.  You can find the top Twitter “Trends” on the left hand side of your Twitter stream, right under “Who to Follow.”

You can even click “Change” and set the geographical target for the trends you see.  You can select national, local or even global.  So what do Twitter trends teach you?  Let’s look at five ways big brands use trends to get some ideas on how to:

1)   Display your brand’s human side. People want to know they are dealing with real people.  There is no better way to show that than through the universal language of humor. When Oreo (@Oreo) tweeted for people to bring their Oreo cookies to the movies, AMC Theatres (@AMCTheatres) jumped in the conversation and reminded everyone of the no outside food policy most movie theaters have and ended with a humorous call out of “Not cool, cookie.” Oreo came back with a playful tweet that displayed some personality stating, “Fair enough, AMC, don’t hate the player, hate the game.” AMC kept it going by replying, “Game on.”

2)   Be the first to know about brand mentions.  You never know when you’ll need to defend your band.  It may even be on something silly.  For example, did you witness the exchange earlier this summer between Taco Bell (@TacoBell) and Old Spice (@OldSpice)? Old Spice wanted to know if Taco Bell’s fire sauce was actually made with real fire or if they were false advertising.  Taco Bell questioned if Old Spice’s deodorant was really made of old spices.  Touché Taco Bell, touché.

3)   Keep up with breaking news and join in.  Twitter was reported to break the news first of Whitney Houston’s death almost a half hour before the press did. This is only one example of Twitter breaking news first.  As a brand you can comment on news events in an appropriate matter and relate it back to your brand.  For example, Tide (@TideMotorsports, @Tide) is part of the cleanup operations at the Daytona 500.  When a driver wrecked and tweeted a pic of it from his perspective, Tide joined in and started tweeting pics of oil and gas cleanups at the race with their product and asking for captions from their customers’ perspectives.

4)   Offer exclusive deals.  Everyone loves to feel like they are part of a secret club.  Offering deals and steals to your Twitter community makes them feel special.  There are a ton of examples out there.  Just search #Halloween and you’ll see for yourself.  What can you offer exclusively to your Twitter followers?

5)   Allow your audience to be part of your brand.  If you never thought you could learn anything from a rock star, think again.  Bands of all music genres all over the world ask their concert goers to tweet pics of the concerts, tweet their song requests and more.  This is a great example of letting your audience have control over their experiences with your brand and what you have to offer.  It gives them a sense of ownership and takes the experience to a whole new level.  This year the Super Bowl even set up a whole social media control center and monitored people tweeting about the event. Complaints such as parking were addressed immediately as well as hotel information, nearby restaurants, directions and more. Many live events run a live Twitter stream across the bottom of the big screen, etc., of the hashtag conversation throughout the event.

With Twitter trends you can not only keep up with your favorite brands but you can easily keep up with the political race, breast cancer awareness month and more. Pretty much anything of interest is being talked about on Twitter.  So how can you relate your brand to some of these topics?  How can you join the party and possibly become the next big trend streaming on Twitter?